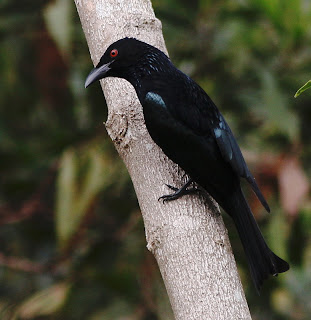 They may at times sound a wee bit demented (specially in duets), but there's nothing stupid about Spangled Drongos (Dicrurus bracteatus). 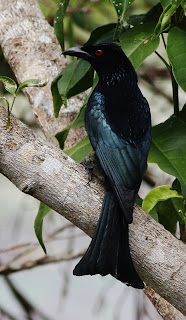 Not only are they darkly. sparkly pretty (as above in Tyto today), they're also pretty aerobatic. That tail helps. 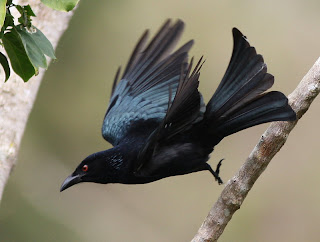 They also enjoy bullying other birds. Hey, they're smart, not perfect!
Click pix to enlarge
- June 05, 2011

Great photos, Tony. There have been numbers of them around here recently also. The other day I saw 3 or 4 Peewees chasing one Drongo - so I guess they are not always the winner!

The certainly are spectacular and cunning. I saw one following a kookaburra at the Fletcher Bot Gdns in Cairns. The kooka found a big, fat grub and was smacking it on the ground. But the bird made the mistake of letting it go for a moment. The drongo zipped down and stole the prize. It was so quick, I'm sure the kooka didn't realise what had just happened ...

I do miss those black spangly streaks across the garden. I REALLY miss those low haunting fruit dove calls even more.

Yes I agree, Spangled Drongos are smart, and very acrobatic, and one of the birds that are so delightful too have around the garden; One of the most impressive things I saw one do one day was chase after an Indian Mynah and a Peewee that were disputing a grasshopper and snatch it out from under their noses in a split second when they both stopped for a moment, (the Peewee unaccountably dropped it on the ground at it’s feet, or it came loose just for a second) the Drongo did a u-turn in mid air and departed rapidly (with the grasshopper) before either knew what had happened, including me almost even though I saw the whole thing, the fast approaching Peewee with Mynah in hot pursuit followed closely by a high speed Drongo who then hopperjacked both the Peewee and Mynah. I reckon you’d have to be fairly sharp to remove the prize from the vicinity of an Indian Mynah, or a Peewee for that matter.
Greg