Winner under my nose 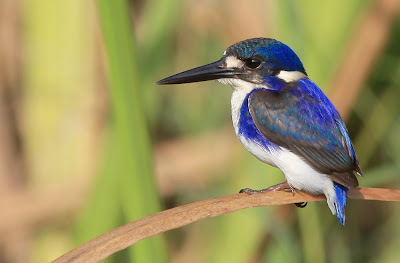 Surprise sighting of Little Kingfisher (Ceyx pusilla) by the Tyto hide provides opening for one of my best pictures (click pic to enlarge), posted early in September on BirdingOz and, he said modestly, winner then of Image of the Week. Didn't see any more of the Littles after taking the above till yesterday's sudden appearance, which came an hour into an extended stint watching fruitlessly for Little Bitterns. Somewhat chastening to go for more than a month thinking a species has departed for the season and then find a bird under one's nose! 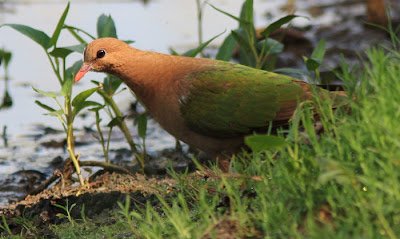 Another to turn up more or less under the nose, this Emerald Dove (Chalcophaps indica). One or two find their way into the more thickly wooded areas every year, seldom staying for more than a few days. This bird for more than two weeks teased me with distant glimpses. The other morning, as I sat on a footbridge, it waddled behind my back down to a remnant pool in the creek. Slight noise gave it away. My turning brought bird into view, but led to quick departure. 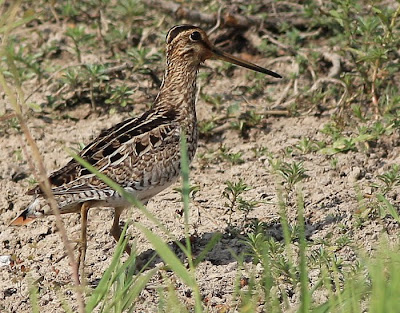 Also given to turning up under the nose and to sudden departures, Latham's Snipe (Gallinago hardwickii). This bird, heading for cover yesterday, is probably the solitary one among three that settled in for a spell around the main lagoon soon after the first of the species arrived early in August. The species can sometimes be approached when feeding actively. More often, they zigzag away at speed. Or march off into reeds and grasses, though always taking care to keep an eye on the intruder.
- October 07, 2009

A worthy winner Tony, well done getting the snipe too, I know how hard that can be.

Stunning image of the Little Kingfisher, Tony.
The Emerald Dove is a favourite of mine, from bird banding days of my youth, many, many years ago.
Cheers
Denis

Hi Denis: I've been chasing Emeralds for a wee while.They are v alert!