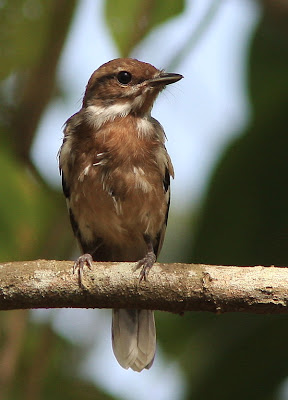 Three hours (spread over two days) of stalking juvenile White-browed Robin (Poecilodryas superciliosa) brought some reward today in Tyto. Junior's natural inclination to hide behind clusters of twigs or under umbrellas of shady foliage was only part of the problem. 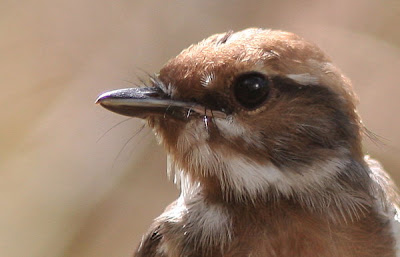 The parents never took prey and headed straight back to the juvenile. Rather, they perched and pounced several times before taking a circumspect route back to the ever-shifting offspring. 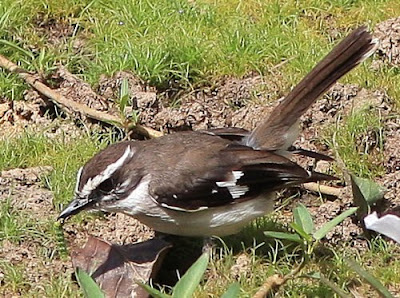 They are also fast on the swallow. Caught quick shot of parent taking a caterpillar. Two shots later in the same high-speed burst, the bird was up and away with caterpillar gulped down. 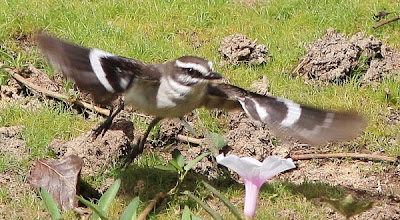 Final musing: Most White-browed Robin nests contain two eggs, and in due course two fledglings. But after the birds quit the nest it's hard to find more than one juvenile, though both parents can be seen. Perhaps the parents don't return enough of their catches to sustain both young?
- October 27, 2009

Interesting. I did not even know they existed. I would have just assumed they were white-browed scrubwren.
Thanks for learnin me somethink.

You do the hard work of carefully stalking the birds - and we just sit back and enjoy the end results! Very Nice!!

Wow - a great series of photos Tony. Like Mick I really appreciate you doing the hard work. I am not familiar with W-b Robins and so found your posting especially interesting. Thank you and Cheers
Barbara

Gidday Mick and Barbara: Can't be hard work because it's too much like fun (most of time - though today Wed got caught in 3-hour rain 'shower'). And before getting soaked I got rare sighting from some distance of Golden Plover: post to come).