Two on to three won't go! 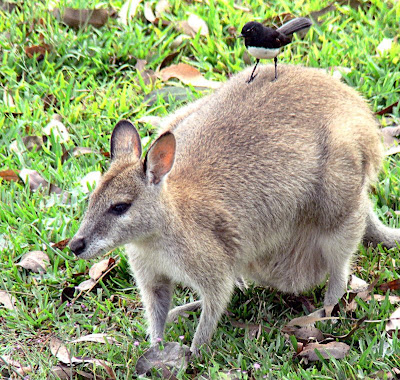 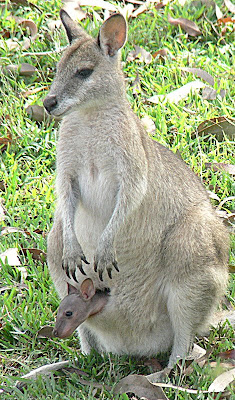 Two out of three ain't bad, they (the ubiquitous they) say.
Ain't good neither, say I. Two's company, three's a crowd as an adage doesn't count for much as we add age.
Enough trying to make every word count. Here's the problem. Agile Wallaby 10 metres below us with young joey peeking brickish-red face out into the morning. Willie Wagtail, diving about and using wallaby's back as springboard.
How many shots needed to get all three in one? Don't waste your time. Problem doesn't compute. It appears the joey and the bird have a deal: one shows, other goes; one chides, other hides.
Second problem: even if all three lined up, the scale between them means two onto one won't go. Cut out the middle Mum? Thought of that but bird and joey wouldn't play ball.
Here's the real lesson. We know it's never going to add up. But we sit there because it just might. And when it doesn't, it doesn't matter. We've had 30 minutes' fun trying to talk them into it.

Complete change of pace and place. The latest edition, 83, of I and The Bird, blog carnival to treasure, is again working its magic, at:
http://reflections.wrenaissance.info/2008/09/i-and-bird-83-joy-of-birds.html
Read, wallow in and wonder at the world of birds and birders. I'd plug it even if I wasn't making a debut entry (he said, mock-modestly).
- September 05, 2008

Excellent! With a little imagination I can see all three.

If only pix came so easily as the words.

Imagination! Frames a few words but creates the best pictures.

G'day Tony,
You might have missed the ideal pic, but it made a great story - loved it. Good luck with your I and the Bird entry.
Gouldiae