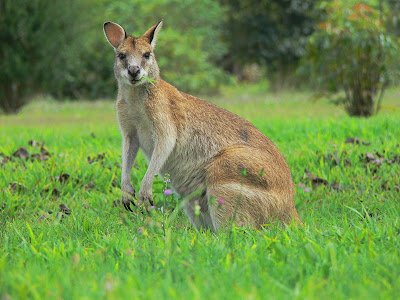 An Agile Wallaby (Macropus agilis) pauses from the serious business of munching selected stalks of grass to take stock of the decrepit life form crawling towards it.

After a few minutes of uncertain feeding it decided to sneak a little closer before hopping slowly away. Maybe it had seen enough of that big glass eye!

Tyto is more or less bounded on two sides by sports grounds and a pony club. Hundreds of Agiles - supposedly nocturnal and definitely gregarious - thrive and sport morning and evening on the resulting tender grasses around their habitat.

There's even been a spot of local hysteria. First, a junior footballer was 'tripped' by a wallaby making its way off the field. And 'all those droppings'. But juniors fall over their own feet all the time, and dogs' and cats' droppings - much nastier! - fester over all suburbia.

But wait, there's more. All that splendid grass in which the wallaby is pictured grows on a raised square, a lightly treed hectare or so planted after Tyto's early shaping. The grass dominates until the Wet sets in. Bigger weeds then take over and are head high by the time any mower can tackle the growth in late April.

All of which is considerably less than carbon neutral. As is mowing tracks ever wider - because tourists love everything trim and parklike.

Am I the only one wishing for some real tree change in the attitude of councils and shires toward parks and reserves?
- September 18, 2008

Hi Tony.
You are not the only one. Our Wingecarribee Council (in Southern Highlands NSW) proposed selling off lots of "spare land", "useless land" - i.e, the beloved parks and play areas of the children of the shire. (Of course, they wanted to sell these blocks to their developer mates).
It created a huge backlash, and I am pleased to say that in the last weekend Council election, three quarters of the Councillors who pushed this argument were thrown out on their ears.
One up for the little people.
Cheers
Denis

Nice shot of the roo. Love that bit of grass in it's mouth.

In Scotland I've seen the local council staff clear all the vegetation for several km's along the side of a burn (creek) right to the waters edge. They never did it before or after that time. Local elections were coming up and it was like they wanted to look like they were tidying up the area.

Councils! Most tend to read the bottom line and see the tourist dollars - hence their desire to turn our small towns into big city look-alikes!

G'day Tony,
No, you're not the only one that thinks like that. I have a constant battle here trying to convince the committee not to cut the rough too deeply between the fairways. I have to keep telling myself it's a golf course, not a flora/fauna reserve, and that it's not mine. One of my difficulties is that the rough cutter is my brother!
Gouldiae.
PS: Nice shot of the macropod.

I feel a bit guilty about posting a pic to make a point. I'll do better by the wallaby another day.

Note today's news about big biz lying heads off re tree plantings and carbon offsetting. We'll have to watch out for similar geenwash from councils!