Why is the Masked Lapwing (Vanellus miles) shrilling at the agitated Willie Wagtail (Rhipidura leucophrys) on the mown track near my 20-minute morning survey area?

Because the grass is rippling? Not quite. The grass is rippling because a two-metre Amethyst Python (Morelia amethistina) is sliding through it, toward a Leichardt Tree and longer buffalo grass.
Leap off bike and move to cut off snake. Which virtually ignores me, eases on to leaf litter under the tree and smoothly rises unsupported close to a metre to reach a low branch. Without urgency the snake climbs a bit higher and pauses to flick out a tongue and assess things. 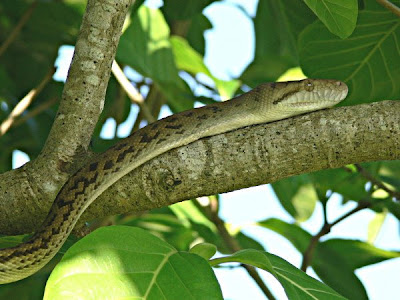 Stalemate. If I stay around the snake won't move. If I go too far the snake will vanish in the mysterious way they do. We compromise. I go off briefly. The snake decides I'm no threat and surprisingly quickly begins to leave the relative safety of the tree. It tolerates my return and some (failed) closeups.
Down to ground, the snake noses through more grass, across a dry ditch, ignores a cool and shaded culvert, and begins a diagonal route down a lightly metalled dirt and grass vehicle track. More pictures at a distance because the snake may well climb the tree against which my bike is leaning. Or even (a bonus!) climb the bike.
Instead: Boinng! Sproinng! Kapow!!! Sproinng! Boinng! Boinng!
A medium-small Agile Wallaby (Macropus agilis) hurtles into view at high speed, bounds on to the raised track, spins in the air, clubs the snake heavily with a thudding right foot to the head and leaves even faster the way it came.
So, two of us totally gob-smacked. Me, and the snake! Neither of us moves for maybe two minutes. The snake with head and neck pulled back in a slightly unnatural position after the wallaby's impact. Perhaps it was literally stunned. Me, mentally stunned and open-mouthed at the attack. 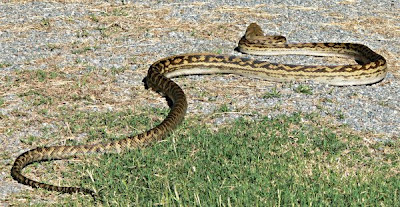 The snake straightens and moves off as if nothing untoward has taken place. Perhaps by a snake's lights nothing odd has happened. (I've sometimes joked about snakes in the wetlands suffering frequent headaches because of accidental thumps by the numerous wallabies.) 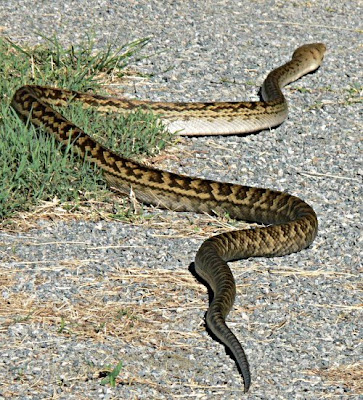 For another 10 minutes we dawdle over about 30 metres of mainly open ground. A final farewell stroke by me sees the snake safely into long protective bladey grass. Something for us both to tell the little ones.
- September 27, 2008

What a great encounter!

So do you reckon the wallaby was gob-smacked too having suddenly come across the snake or do you think it was deliberately having a go at it?

I'm in no doubt the wallaby set out to attack. The sudden speed of its approach, and the accuracy of its spin and kick argues intent. And there was none of the skidding clumsiness of wallabies when forced to make a sudden change in direction.

But who really knows? Just have to treasure such moments and recognise the validity of other's doubts.

Fascinating. No doubts from me. That's how imagined it but just wanted to clarify that was what you were saying. Wish I'd seen it!

Wow Tony,
Some story. You never know what Mother Nature will throw up next. A great sighting that made enjoyable reading.
Gouldiae

I'm surprised the snake was still well. I understand they have a very fragile backbone and easily suffer injury; a car running over a snake will kill it every time, for instance.
Maybe the size of the python makes it more robust.

Think it was more that strike was to head, Geoff. And a med-small wallaby isn't so heavy.