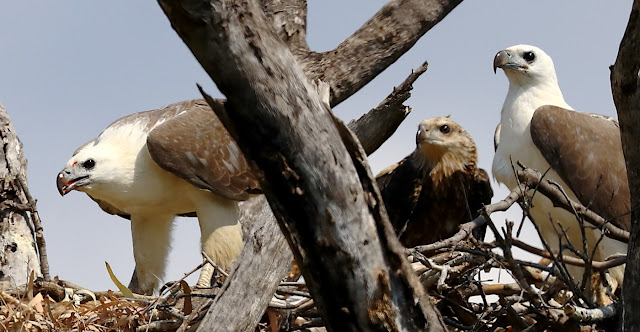 Behind this picture today of White-bellied Sea-Eagle family togetherness may hide an altogether different one of a cheating, food-hogging, faithless father and a neglected partner and juvenile. (And this in the same family from which three weeks ago a second juvenile had to be rescued after being pushed or falling from the nest.)

Just an hour before above image was taken the male tucking into unidentified lunch in TownsvilleTown Common Conservation Park was seen carrying large fish or turtle away from Freshwater area. But instead of flying to above nest the bird crossed the wetland and soared on thermal up and over ridge of Many Peaks range. It reappeared minutes later without prey and stooped without luck upon Magpie Geese on distant pool before being lost track of. Seems it later brought another catch to the nest - and ripped into it without any sign of sharing. Or ... or there may be a third breeding pair I'm unaware of and above male may have case for suit against me. 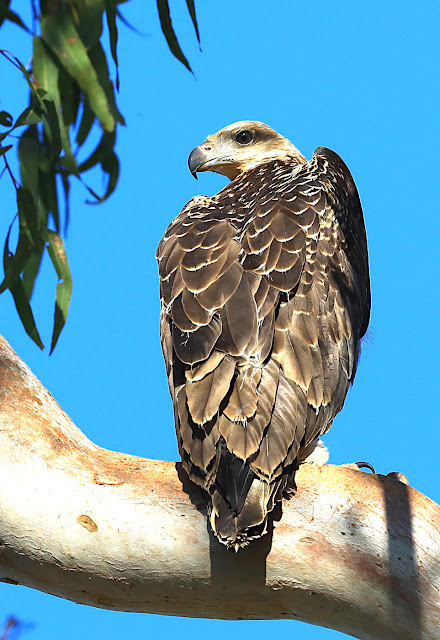 On firmer ground with juvenile from the second known nest site perched on branch  behind Melaleuca viewing area and getting close to launching into first flight. Its more forward sibling took off unseen last week and, as has been their way, has not been seen since.

A notable difference between the two breeding pairs has been the many noisy vocal interchanges I've heard for about three months between the above juvenile's parents and near total silence from the top picture's adults. Perhaps explainable by close proximity of the silent birds' nest to a well-used walking/cycling track. Or not.