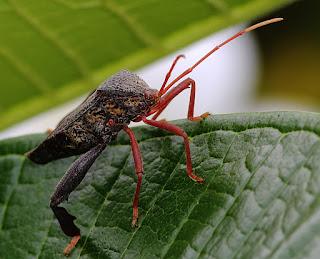 One day an insect will fly up, stop for a picture, and magically appear in the first field guide I turn to.
One day, not this day. So, I've no idea what big boy (20-25mm body) above is, or why it's shaped like a radar-deflecting bomber. Brief glimpse in flight of orangey wing, or underwing. 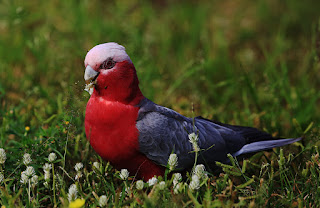 Away from insects, always a buzz to find Galah or two alongside the road. Feeding birds tend to be more approachable. Extra interest came with soft calls between bird and partner as a walker and his dog appeared. Sort of: 'Might be time to go?' 'Yes, I think maybe we should.' 'Just across the way, all right?' "That'll do nicely.' 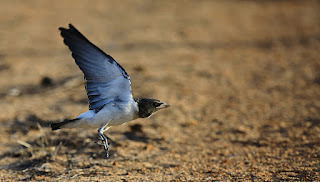 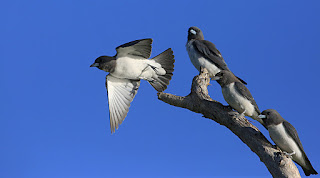 Bit less discussion of flight among White-breasted Woodswallows. Insect eaters don't have it quite so easy as flower munchers. To catch food on the wing the food first must take to the sky. The past few mornings have been mixed for the woodswallows.

Hi Tony, apparently it is a Clown Bug.
http://www.brisbaneinsects.com/brisbane_bugs/ClownBugs.htm
Not the same type that is shown but clearly related.

Thanks for the Blog

Thank you, Martin. I wonder why I waste time even making token effort to ID things strange to me (99.9%, or more) when my blog readers do the job so efficiently. And thank you all for IDs to come as the macro lens joins 600 on Troopy's front seat. With 300 it's getting bit crowded. Toyota's biggest single-seater!