Of skinks and snails and purple hen tales 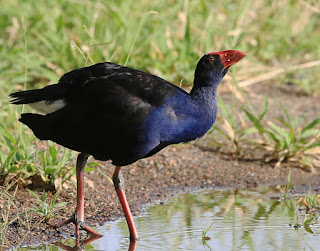 Among some odd sightings lately, Purple Swamp-hen drinking at roadside pool a few metres from the local beachfront. Only one of the species I've seen since moving to Townsville from Ingham (where the birds - Cane Coots - win few friends by dining on young sugar cane shoots). 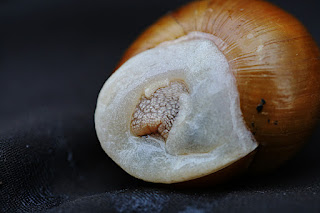 From the middle of severely burnt blady grass patch, snail survivor. So what? So, this is the first live snail I've found for years. It was struggling for purchase in a sea of ash. And it had survived dozens of Black Kites, Kookaburras and Lapwings. Imagine how gently I picked it up, gave it a wee wash, let it goob over my hat, and set it down safely in a patch of unburnt grass. 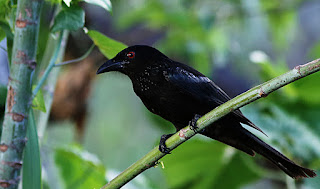 Nothing odd about a Spangled Drongo, this one from from the Sustainability Centre walkway next to my new abode. But certainly something odd about 16 of them almost on top of each other in the Town Common yesterday and again early today. One or two appeared to be youngsters begging to be fed. The local birds usually get about in threes. I can't resist it: maybe it was just a local branch meeting. 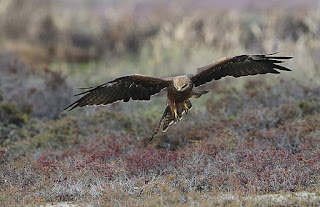 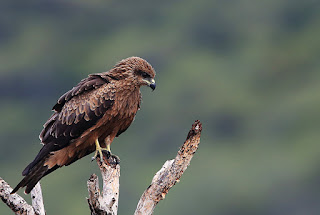 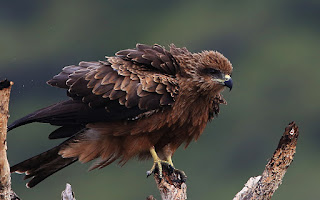 And here's a trusting young Black Kite that's taken a liking to standing about in a newly burned patch elsewhere in the Town Common. Wouldn't let me too near while we were both on ground, but allowed me close when it flew to old tree nearby. 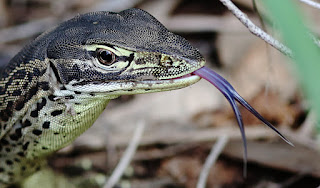 Monitors don't usually allow anyone this close. But neither do they like risking turning their backs on a perceived threat (ditto with snakes). Quick chat, few pictures and we can be on our way(s). 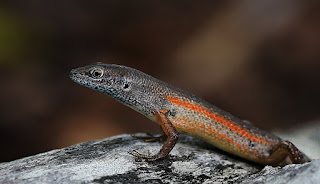 Small skinks, though, operate differently. First instinct, run. Then stop. Has the threat halted? Yes? Don't run. Is that big thing a threat at all? Seems not. Well, then. No more running. Pictures? Sure, why not? Which do you think is my best side? 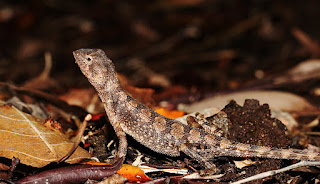 Little dragons by and large, or by and small, don't trust the skinks' instincts. They run. And mostly keep running.
- January 12, 2017

Not sure if you're after an ID, but that big juicy snail is a Xanthomelon. At one stage (almost) all the eastern Xanthomelon were treated as X. pachystylum, but we seem to be using Iredale's names again. In which case, it's probably X. saginatum. They are tough snails and their bleached shells are favourites of bowerbirds.

Thanks for that Snail. The four bowers known to me close to the Common are indeed packed with the shells. What's a bit odd is that I see plenty of Great Bowerbirds yet can't recall ever seeing bird in flight carrying any item back to his bower. It's not as if they're secretive about things generally. I might try wee experiment with old shells at present showing out in new-burnt areas. BTW, if I quit semi-vegan diet how does X.sag taste?