Egrets land to down 'flying' fish 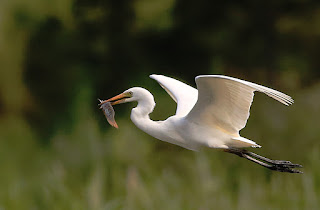 Just two egrets on the main lagoon most of yesterday morning. Fishing's not been great for them lately but they scored big catches within few minutes, and eventually scoffed same, unlike grebe of previous post. First up, Intermediate Egret (Ardea intermedia) flies away from persistent photographer. 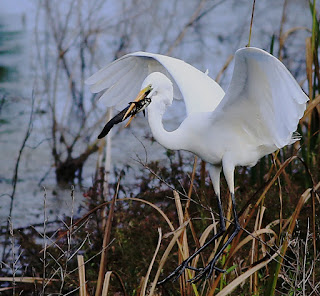 Barely had it got fish down before Eastern Great Egret (Ardea modesta) dropped in alongside it - opposite main lookout - and after much juggling swallowed the catch.

Sure these two birds are not the same? I hear your question. It shows how deceptive they can be when not standing around with necks extended. In the field it's hard to see differences in gape length below eye and bill ratio. So, take my word for it. 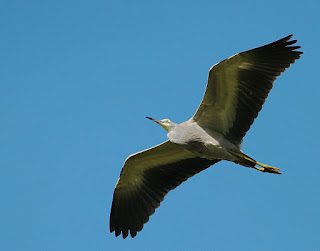 No such problems with Grey Heron (Ardea cinerea), flying overhead later. No surprise to see it without large fish. The species tends to pick up smaller stuff mostly at water's edge.
- July 04, 2016