Python passes on climb but eyes the sky 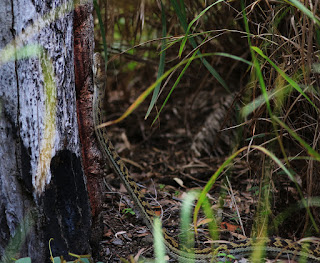 Three-metre Amethystine Python thinks about tackling a 15-metre ascent at Jourama Falls. The first 0.6-metre would have been the easy part. It decided otherwise soon after. A pity, because it's fascinating watching the technique climbing snakes use to go up vertical trunks. They form a series of right angles. Up, across, up, across back, up, across. Nature's geometry - and muscles - at work. 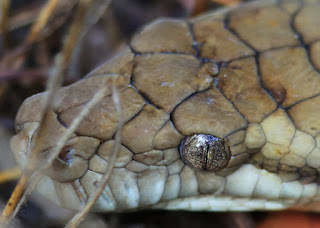 Less often seen and far removed from right-angled climbing is the convex mirror of the large eyes. Above, trees and sky reflected in closeup. As usual, the snake paid almost no attention to me pushing a lens close to its head. Little ever appears to disturb an Amethystine.
- May 18, 2016