Dingos in the gun but help Night Parrots' shot at life 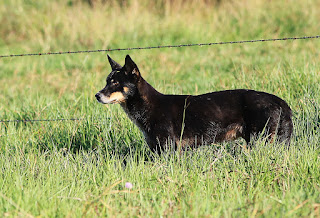 Seldom find any Dingo up close in open country standing still for a picture. But the animal above showed no concern about me out of the Troopy and walking towards it on Orient Station this week. Bit odd, because all dogs are in the sights of cattle breeders everywhere. Calves (and sheep, elsewhere) are killed by dogs, Dingos and wild mixed breeds. So most Dingos throughout Australia are in danger of death by shooting or baiting.

There is another side to the Dingo however. Fuss in birding circles lately centres on competing claims about Night Parrot ('world's rarest bird') research. Rival conservation groups have unhappily got knickers in a twist over wildlife protective fencing and claims of parrot deaths thereupon.

In the course of hoo-ha, good news. Extensive surveys within thousands of square kilometres of mooted parrot habitat showed Dingos all over, few cats and no foxes. The Dingos fed on wallabies and the like. Foxes obey an invisible ill-defined line which they don't cross. Cats suffer no such limits. But Dingos like eating cats, and foxes. And don't seem to trouble the spinifex dwelling parrots. Win-win-win.

Pity pro-Dingo arguments are not everywhere so compelling.