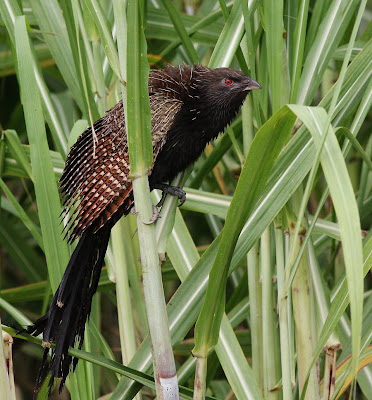 Mismatches between predators and prey during roadside jaunt yesterday. First, came upon Pheasant Coucal (Centropus phasianinus) - one among many on the morn - taking refuge off the ground in sugar cane. Dark plumage and red eye signify breeding. Same colours male and female. 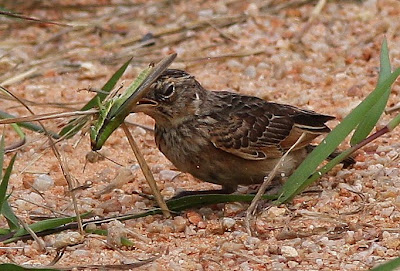 Next up, Horsfield's Bushlark (Mirafra javanica) bewildered by large grasshopper, prey sought by Coucals, among others. Bushlark picked at find, dropped it, ignored it, returned, picked at it, picked it up and, finally, happily, it seemed, dropped it in long grass. 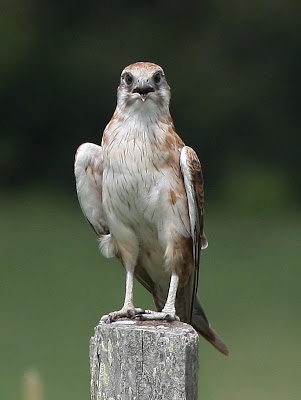 Which is definitely not what happens when Brown Falcon (Falco berigora) gets hold of grasshoppers. This light morph bird one of a pair whose territory roughly centres on grasslands in which I've been chasing Zitting Cisticolas. First time either Falcon has stayed on fence post after I've stopped car. Didn't stay quite long enough, of course. 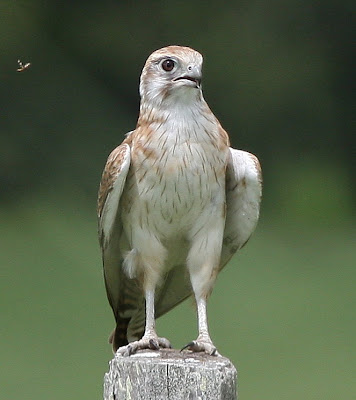 Above, though Falcons will hawk for large insects this bird not interested in whatever has fluked its way into upper left of this shot. 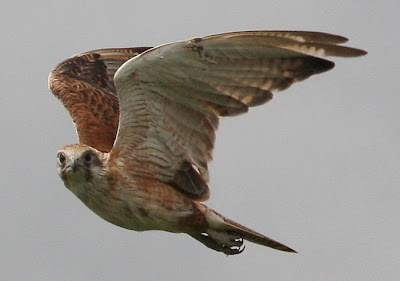 Up and away. Wee glare for intruding photographer. Off to rustle up a grasshopper or two?
- February 17, 2010

Thanks Duncan. Been trying to get up close to PCs for some time. No luck. It's odd that the bird was first to make big impression on me when I first arived in Oz back in 1997.