Hobby's my bird: birds my hobby 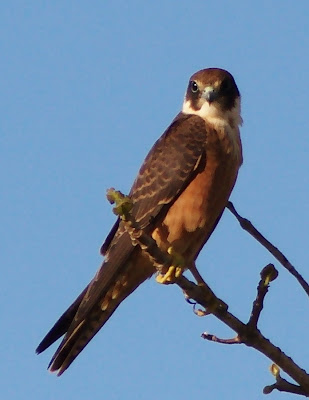 Seldom see Australian Hobby (Falco longipennis) in the wetlands, and even more rarely does one drop in and take the time to scrutinise the prospects of an easy breakfast. Bird didn't much fancy what it saw and took off before I could get closer than about 50 metres. I suspect its home base is along trees that line the southern boundary of Ingham airstrip, which abuts Tyto's southern edge. 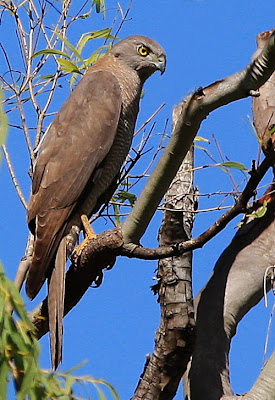 Plenty of Brown Goshawk (Accipiter fasciatus) sightings over past few months, but this bird popped up while I was trying to catch Rainbow Bee-eaters in flight on the coast at Lucinda yesterday. Put paid to my bee-eater hopes (which weren't panning out anyway!). 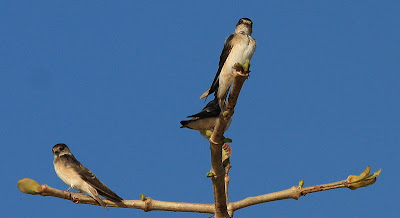 And while posting birds up trees, here's a shot of Tree Martins (Petrochelidon nigricans) atop a Leichhardt tree. Unlike the many more or less locally resident Fairy Martins and Welcome Swallows, Tree Martins appear for a month or two and depart for better aerial pickings elsewhere. 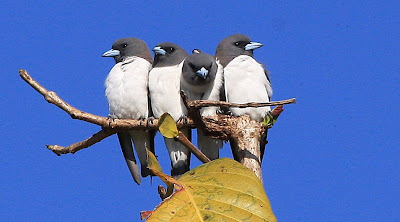 Which also suits the aerially competing White-breasted Woodswallows (Artamus leucorynchus) to a T (or a tree). This quartet today grouped snugly together (as is their habit) near the tree that supported the Tree Martins earlier in the week.
- August 28, 2009

Excellent little series of birds in trees. :) Boy the Goshawk looks like a nasty bugger. Shame about the Bee-eaters but you can't blame them for being scarce with the BG hanging around.

G'day Tony,
Great entry, even just for the title! The woodswallow shot is a classic.
Regards,
Gouldiae.

Thanks Lucky: BGs always carry that mean glower. Perhaps many are happier on the inside. Bit like some of us!

Hi Gouldiae: Trouble usually is getting all in the group to look up at same time.

Yes it is a lovely photo of the Woodswallows, the fact that one is looking down makes it especially appealing.
We have also been observing Brown Goshawk here - excellent shot Tony, a typical pose.

Hi Barbara: I suspect Tyto won't be seeing any goshawks soon. Around this time of year they vanish until about April.

Hi Tony
I have just given your blog site a plug on the Birds in Backyards forum, as Ed from Townsville has just posted some photos from Tyto Wetlands on that forum.
Cheers
Denis

Thanks Denis. I bumped into Ed over the weekend and had a long chat. We have plenty in common. Great to see others sharing Tyto's offerings.

Good News, Tony
.
Ed is good value on the BiBY forum, and an excellent photographer.
Glad you met up with him.
.
Denis