Baza about - watch out frogs! 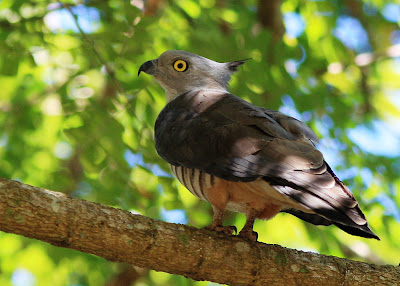 Pacific Baza (Aviceda subcristata) didn't spend too long sitting around in this rain tree before launching after a tree frog. Tried to follow the action but bird took off for distant parts, accompanied by pathetic barking from the doomed frog. 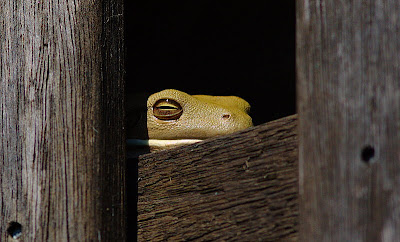 But not every frog suffers such a fate. Here's one turning from green to brown among the timbers of the Tyto hide. The smallish tree snakes in the roof of the hide have apparently given up trying to put the bite on large frogs that have called the hide home for weeks. 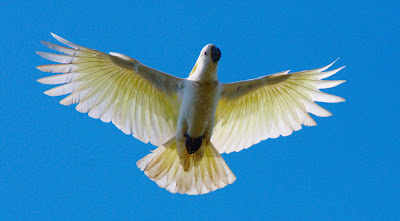 Sulphur-crested Cockatoo (Cacatua galerita) only too happy to put the bite on many things, including parts of the nest made and erected in Tyto in an effort to attract Ospreys. Here's a cockatoo today coming in to land on the remnants of the nest, only to find me lurking nearby (trying to grab shots of Little Kingfishers).
- August 13, 2009

I'm glad some of the frogs are escaping! Yeah! I do know birds have to eat!!

I think there's a fair balance between birds, frogs - and snakes. certainly, it's a lot harder to find frogs than birds (during the day and the dry).

Hi Tony.
Who is making the nest to attract the Ospreys?
Great shot of the Baza by the way.
Cheers
Denis

That frog sure looks relaxed!

Hi Denis: Part of John Young's plan. First truck tree in. Later, erect nest. ('If you build it, they will come.') Didn't allow for Cockatoos destroying much of nest bulk. And Ospreys have proved extremely reluctant to even come and look. Saw my first Osprey for Tyto 2009 yesterday. It was seen off immediately by Whistling Kite.

Hi Andy: Big frogs don't show much tendency to stress. Don't show much anything most of the time. Come dinner time and the killer comes out!