Snakes won't sit up and listen 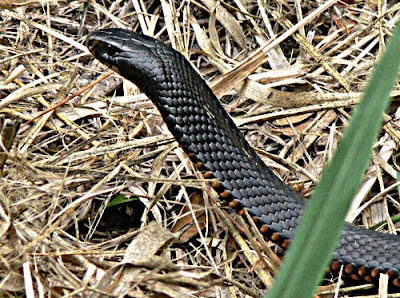 Thirty minutes within three metres of a busy Red-bellied Black Snake today for typical outcome: not one good picture. Picture above, best of more than 50, is not even typical of the encounter. Snake spent almost all the time with head either under grass or obscured by the stuff.

Red-bellieds (Pseudechis porphyriacus) are frustratingly prone (oops) to nosing about in full sunshine and managing never to be picture-perfect. Came upon today's 900mm snake from behind on quiet forestry road. Hopped off bike and stepped in closer each time head was under dead grass.

Off we went. Snake working this way and that. Slowly north, sticking to slashed strip about two metres wide. Vigorously sliding under and butting bunches of grass from below to force a passage through the swathes. One sudden hidden strike brought hope of a kill, but led to nothing. Halfway through the 40 metres the snake paused briefly and lifted a suspicious head (the picture) but immediately resumed the hunt.

On we went, until the cut strip began to narrow and I tried to get both closer and ahead of its probable next move. A blur of black and snake gone into the long stuff.

Just have to accept this is the way of things. It's a lucky privilege having factors combine to allow a 30-minute insight into behaviour. In similar pattern, I saw cannibalism of a 600mm Red-bellied by a 1200mm specimen in Tyto about three years ago. But on that occasion I stayed 6-8 metres back as I trailed the big snake. 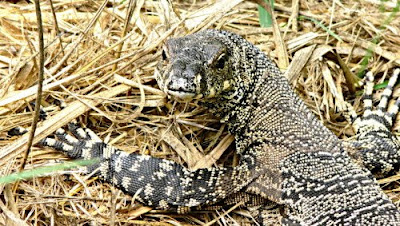 Much more obliging, a Lace Monitor (Varanus varius) sunning itself also alongside the forestry road near where I'd seen it yesterday. But again the grass kept getting in the way. This is the first Lace Monitor I've seen around Ingham. Almost as rare is the Frilled Lizard (Chlamydasaurus kingii). Several skinks, big and small, but little else on reptile legs.

Depauperate, that's the word of the day! However, there's no need to use jargon to stop people reading this post. Putting a snake at the top is enough to slash views. But I can't stop loving them (in the nicest, safest possible way!).

Nice head shot of the Red Belly. I wouldn't call a snake, a goanna, and several skinks depauperate. Maybe by QLD standards but nor down here. We only have 3 snakes and 17 lizards in all of Tassie.

Ta, but I wanted that flickering tongue shot and never got it.
12 or so snakes in and around Tyto not so sparse. But big lizards are scarce. Many losses (not all) down to Cane Toad.
Count your blessings!