Frog bites off two too much 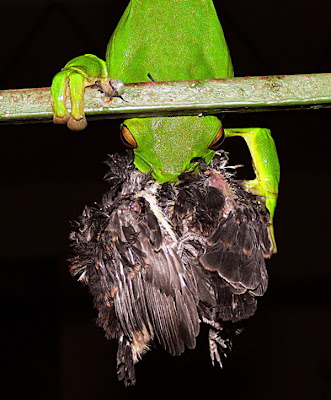 Rebuilt earlier post to bring it within the layout that seems to work best with this template.

FROGS seem to have top PR people, don't they?
And it's not only because many of them are dying off in disturbing numbers all round the world. Seldom do we hear anyone bad-mouthing a frog. Nobody jumps up on a chair if a frog enters the room. Or rushes for a death-dealing broom.

Even the glitteringly colourful tropical rainforest frogs carrying lethal amounts of toxins produce more oohs and aahs at their beauty than flinching from their deadliness.

But a frog has to live. Living for most frogs means death for some other form of life. It's a jungle out there, they say, with that old line from one of Darwin's chums: "Nature raw in tooth and claw". Not so many teeth or claws with frogs, rather a cavernous mouth and an appetite to match. 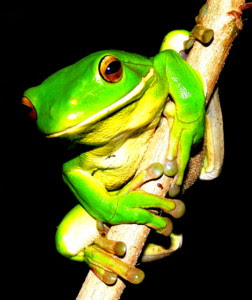 Yet big eyes and even bigger mouths can lead to biting off more than one can chew. So with this White-lipped Green Treefrog. 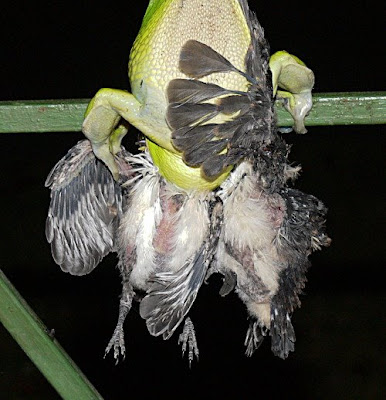 In the dark at a caravan park in North Queensland, the frog sought a late-night meal at a Willie Wagtail nest holding three near-fledglings. It grabbed two as one fluttered to safety. 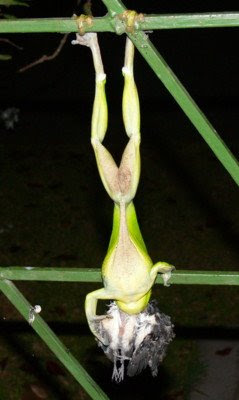 Problem then for the frog was the weight of two birds and its tenuous hold on the wrought iron grille the parent birds had built their cupped nest upon. Gravity won. The frog lost its grip on both birds. One died. The other, put straight back into the nest, survived, along with the third sibling.

The frog lived to bite another day. (Green Treefrogs are thriving.)

That is absolutely awesome!

G'day Tony,
Fascinating post. I haven't been able to catch up with too many of our 'southern' frogs yet. Hope to though.
Gouldiae

Gotta get lucky now and then. Makes up for all the ones that get away unsnapped.

Our Master Naturalists were just discussing whether or not Leopard Frogs or Bull Frogs would take a small bird, like a hummingbird, or sparrow. I guess this post answers it! Great Pics.