Ravens too quick for Channel-billed Cuckoos 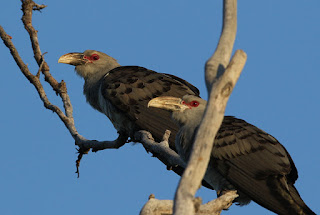 Channel-billed Cuckoos are back and looking to sneak their eggs into raven and crow nests. The two seen today are possibly birds heard over weekend near Town Common entry gate. Bad news for the biggies, Australian Ravens have already reared early young this season. And the once-dominant Torresian Crow - a later breeder - is less common hereabouts nowadays. But I saw a Pied Currawong - another parasitised species - across town the other day. Near Anderson Park, whose tall gums draw many Channel-billeds seeking night-roosting. Watch out, Currawongs! 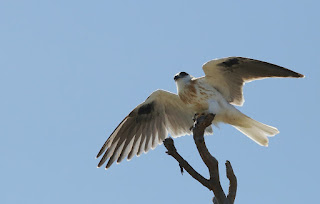 And watch out, young Black-shouldered Kite. Bird enjoying bit of preening in the morning sun yesterday found itself under fire from three White-breasted Woodswallows, offended by the Kite daring to sit atop 'their' tree. Kite flinched and flinched again before surrendering the perch. Next time seen, the immature's streaky breast may be as adult white as the Woodswallows'. 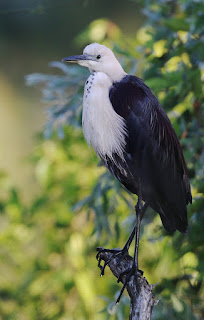 Plenty of white on show this morning with White-throated Heron waiting patiently for me to move away from nearby pool so it could get back to feeding. Mud in many pools ankle deep a few days ago is fast drying out. 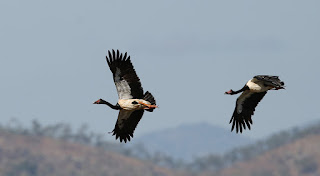 Which is good news because of a sudden Magpie Geese - missing since our wet week late in May - are returning. None two days ago; 190 yesterday; 600 today. Sorry, hard to capture image of 600, two, plus a few, have to do. 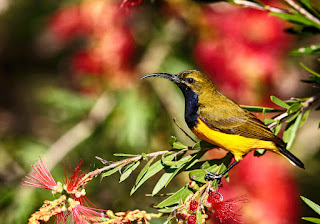 And finally down to one. Nice little male Olive-backed Sunbird. Like the colour? It's done with HDR plugin comes with latest version of Gimp. (You didn't need to know that, but there's some showing off involved).