What's wrong with rolling out the weedkiller? 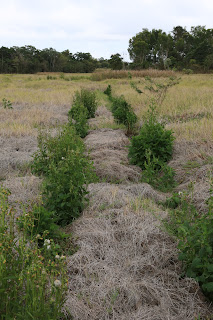 Weeds are bad! Right? Gotta get rid of them! Right?

So let's get the Hi-lux super spray unit out and zap all that hymenachne and pink burr and stuff out of the swamp ricegrass at Tyto. Right?

See what happens! Weeds say thanks very much and spring up all along the vehicle tracks through the ricegrass. Notice how high the dead grass is. Weeds can't get through from down below. Until the nice spray men come along and flatten the way for them. 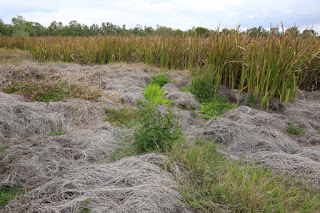 Hymenachne and wild tobacco both benefit. So the work to kill hymenachne is now promoting its growth.

And you'll never guess what efforts to remove salvinia and pink lotus from the main lagoon system have achieved. Temporary and ugly death of lotus and the sinking of free-floating salvinia.

Plenty more of both sitting in the mud below (lotus) and at lagoon edge (salvinia). Waiting for the next rains (January, probably, if El Nino allows).

Could be worse. Well, yes and it certainly has been.

Because all that ricegrass was the roosting area for six  iconic Eastern Grass Owls, parents and four matured youngsters. 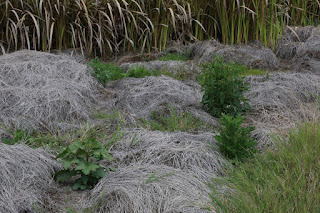 They didn't like the nice spray men driving over the top of their day tunnels and ideal breeding habit. They quit the place.

I've been able to find just one female in past four months.

Bad enough that the failed Wet this year has driven most of several species away to search for wetter breeding places.

But all was made worse when the conditions allowed the nice spray men access to the ricegrass much earlier in the year than usual.

Overall, I think conservation areas are not well served by local bodies with their mindsets of tidy parks, and groundskeeping.

In extension of which, I append a letter submitted to the local bi-weekly paper, and run in it with odd deletion only of dollar figure for Tyto spending. Odd, because the figure came straight from the newspaper. Anyway here 'tis (Sept 6):

Saturday's Express reveals Tyto Precinct and Wetlands (whatever the combination means) cost $268,000 in financial year 2014-15. Presumably the sum covers maintenance of all grass and tracks and footbridges, hides and lookouts around the main lagoon system. There was also, I think, a farcical wooden walkway on expensive stainless steel footings to pointless wet hole in reeds and more recently an overengineered culvert, plus more plastic bollards (someone's favourite nonsense for years).

So, what's Tyto's problem? Well, there is the $18.75million of ugly steel and concrete out the front. And the silliness of expecting much return from such empire building, the purpose of which was a variation on Keynes' men digging holes and filling them in again to keep economies and communities ticking over. It's all there now. Live with it! Though it would be great if the info centre got a minor makeover  to remove the dreadful angled stanchions and hide the mess of aircon atop the roof.

Back to the 'real' Tyto. It continues to draw birders from around the world. It's high among the eight North Queensland hotspots that fill the top 10 for all of Australia.
That $268,000 could be trimmed 50% by reducing track widths, slashing the mostly ineffective spraying and token weed-tree culls, and getting rid of bollard lovers, wherever they rule.

What does the real Tyto need? Decent maps and signage (promised for five years). A hide that actually hides birders and looks onto a clear (not weed-choked) channel. Without any 'help' from the shire it will continue to be a birders' paradise.

The $18.75m other Tyto? No worse than most such. Some even like the prison camp lookout and factory block library (of which I am big user) and art gallery.

Just remember, the real Tyto was there first (saw a female Grass Owl on Saturday) and is the reason for all the rest. Let's put first things first.

Hungry youngsters might call till blue in the face 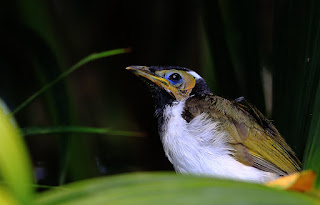 Young Blue-faced Honeyeaters (Entomyzon cyanotis) left nest little prematurely in the caravan park lately. One needed rescuing from danger of drowning in swimming pool. It overnighted in a nice warm and dark carton before being placed outside next day in an open clear plastic container. Parents resumed feeding it and youngster scrambled  up into trees over next few hours. 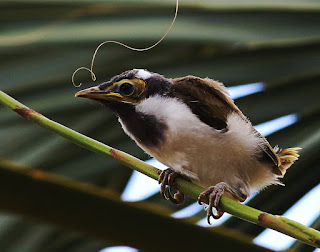 Brother or sister didn't ever hit the ground, though often coming close. Blue-faces are among the most raucous honeyeaters (and aggressive: will swoop people sometimes even when not nesting). Noise starts early in life and both young birds could be heard begging for days through much of the park. And are still going strong. Wondering about the 'line' above the bird? It's simply a fine portion split from a palm frond.

Honeyeater doesn't give a fig for fruit trend 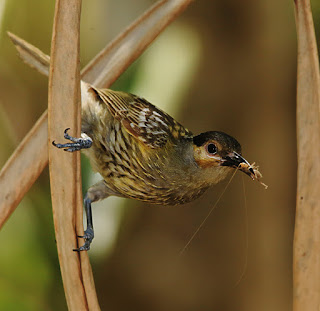 Looks like Macleay's Honeyeater (Xanthotis macleayanus) lost way and ended up in drying wetland habitat, but bird grabbed prey from planting in the Jourama Falls camping area yesterday. Seldom seen so many honeyeaters active in the area. Most were feeding on newly ripened cluster figs. Much interest also shown in boiled red capsicum cast away by departed campers. Doesn't take lot of imagination to see links between extreme dryness generally being experienced this year and a strong preference among birds for moist feed. 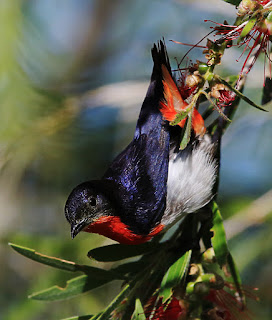 With preferred feeding growth not doing so well, Mistletoebird (Dicaeum hirundinaceum) takes to bottlebrush flowers  hanging over parking spots at Tyto Wetlands entry. Air has been full of their sharp high calls lately. Conditions would seem against much breeding as materials for their soft woven 'baby bootee' nests have dried up. 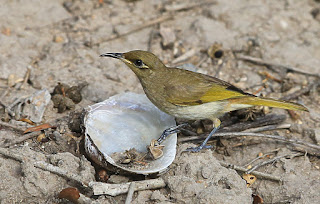 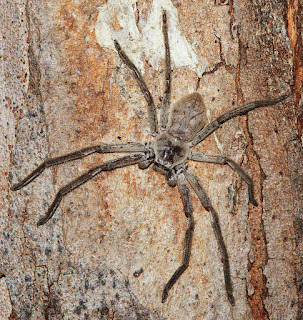 So much hanging around trees lately probably makes others suspect I've developed a fussy-dog toilet fetish but today turned up a Giant Grey Huntsman (Holconia immanis) that wasn't peed off when its bark hide was turned inside out. 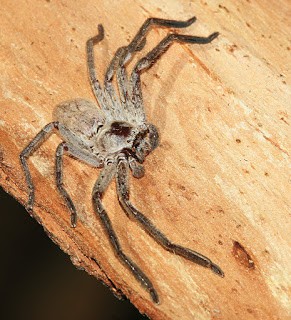 Interesting sidelight to photographing the placid spider was counting the number of flashes reflecting from all those tiny eyes. Best of all, no angry hairy 'monster' threatening to bite me. 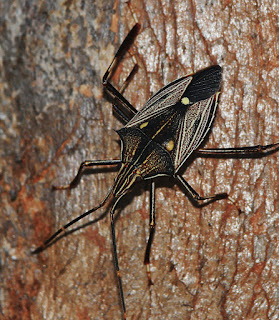 And then there's no legs at all. Couldn't get Red-bellied Black to stop for head-on shot so had to settle for harsh crop of snake speeding across gate shadows. 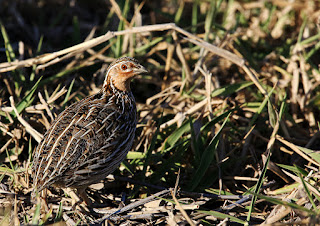 Stumbled upon Stubble Quail (Coturnix pectoralis) in drying grasses at Mungalla Station today, some distance from usual haunts near creek track and in weedier mix of flora. No sign of any partner, but luck mainly determines sightings of the species. 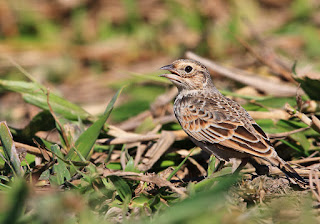 Much more easily found, specially this very dry year, Horsfield's Bushlark (Mirafra javanica). The birds seem to be thriving in competition with  the scores of Australian Pipits ever present on tracks and bare spots in the grasses, though the Bushlarks favour slightly greener cover.
- September 11, 2015 No comments: 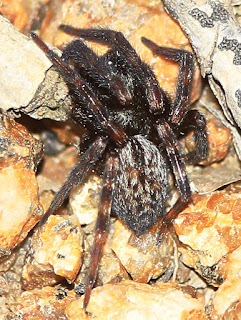 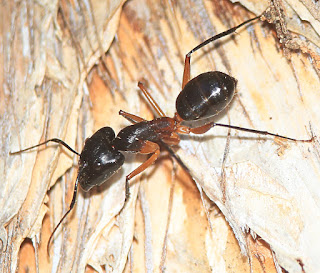 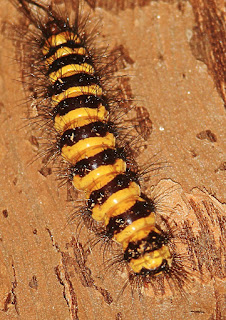 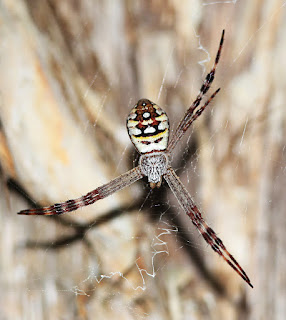 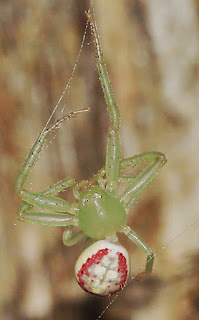 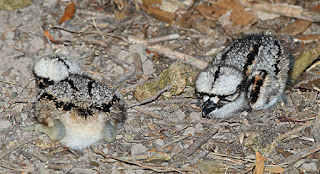 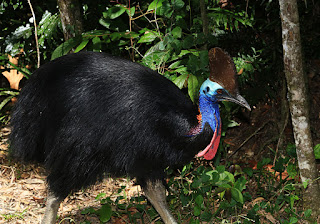 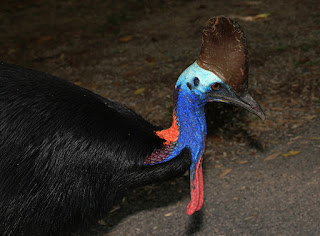 Dangerous walk? Not at all, so long as attention is paid to bird's body language. However, high on the buzz of the meeting after so long without a sighting made I the mistake soon after of picking up a tiny supposed woodlouse or similar from under some peeling bark. Oops. Twin fangs and sharp, sharp pain. For an hour or so. Sneaky little spider had rolled into ball to escape and didn't want to be picked up by a bare-handed idiot high on Cassowary encounter. Hard to read such tiny body talk. Tweezers or gloves are the key words.
- September 02, 2015 3 comments: